Refrion dry and adiabatic coolers have been developed to meet the high reliability required for power generation applications.

They have been used worldwide for a variety of applications such as:

Steam or gas gensets produce a lot of heat that needs to be rejected via an air cooled condenser (or radiator). Most package solutions incorporate an integral radiator, however, there are some applications where this is not possible or feasible due to the amount of heat generated and other site constraints such as limiting space or sound levels. In those appplications, Refrion can provide a custom built air cooled condenser (or radiator) to suit.

CCHP or ‘combined heat and power plus cooling’ systems generally incorporate an absorption chiller that is driven by waste/surplus heat from the power generation process.

Absorption chillers require cooling water at lower temperatures than possible with vapour compression chillers, and as such they typically incorporate an externally mounted cooling tower into the system.

Cooling towers are either ‘open circuit’ whereby the system cooling water is distributed over a fill pack with the cooling tower and is in direct contact with the ambient air, or ‘closed circuit’ which introduces a separate heat exchanger through which the system water flows and a separate localised water system is distributed and recirculated over the heat exchanger, thus, the ambient air is not in direct contact with the system water.

For applications that require particularly low cooling water temepratures for absorption chiller heat rejection, the former would generally be favaourable. The available water temeprature off a ‘closed circuit’ cooling tower would typically be around 20C above that for an ‘open circuit’ tower operating under identical design conditions, and this is due to the approach across the additional PHE.
Closed circuits tend to be higher in CAPEX, however, since the main cooling system is a sealed system free from contaminents, this can prolong the life of the main cooling pipework system and also reduce maintenance costs substantially.

Refrion adiabatic cooling systems are able to produce water at similar temperatures to a ‘close circuit’ cooling tower and are therefore regarded as a viable alternative.

See our comparison of adiabatic coolers versus cooling towers 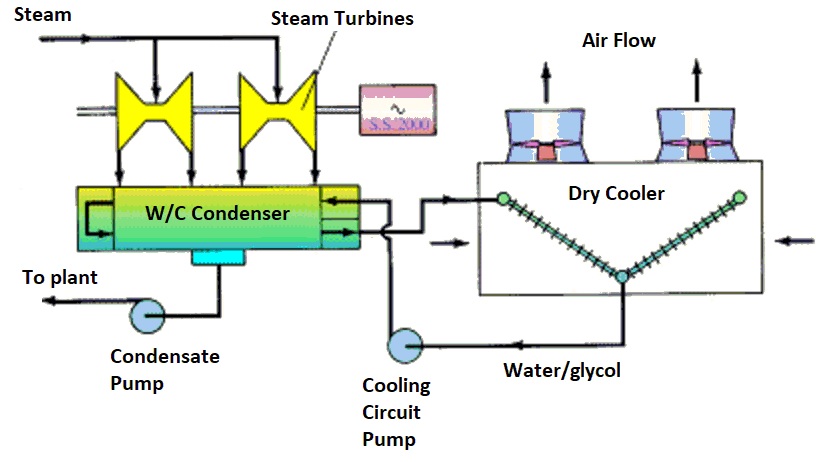 Refrion dry coolers have been used successfully within a process system for the production of biomass fuel.